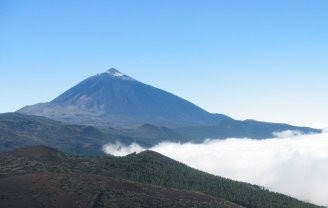 Tenerife
After heaving to during the night we came in sight of Teneriffe at day break, bearing SW about 12 miles off. We are now a few miles tacking with a light wind to Santa Cruz. Which at this distance looks a small town, built of white houses and lying very flat. Point Naga, which we are doubling, is a rugged uninhabited mass of lofty rock with a most remarkably bold and varied outline. In drawing it you could not make a line straight.

Every thing has a beautiful appearance: the colours are so rich and soft. The peak or sugar loaf has just shown itself above the clouds. It towers in the sky twice as high as I should have dreamed of looking for it. A dense bank of clouds entirely separates the snowy top from its rugged base. It is now about 11 oclock, and I must have another gaze at this long wished for object of my ambition.

Oh misery, misery. We were just preparing to drop our anchor within 1/2 a mile of Santa Cruz when a boat came alongside bringing with it our death-warrant. The consul declared we must perform a rigorous quarantine of twelve days. Those who have never experienced it can scarcely conceive what a gloom it cast on every one: Matters were soon decided by the Captain ordering all sail to be set and make a course for the Cape Verd Islands. And we have left perhaps one of the most interesting places in the world, just at the moment when we were near enough for every object to create, without satisfying, our utmost curiosity. The abrupt vallies which divided in parallel rows the brown and desolate hills were spotted with patches of a light green vegetation and gave the scenery to me a very novel appearance. I suppose however that Volcanic islands under the same zone have much the same character.

On deck to day the view was compared as very like to other places, especially to Trinidad in West Indies. Santa Cruz is generally accused of being ugly and uninteresting, it struck me as much the contrary. The gaudy coloured houses of white yellow and red; the oriental-looking Churches and the low dark batteries, with the bright Spanish flag waving over them were all most picturesque. The small trading vessels with their raking masts and the magnificent back ground of Volcanic rock would together have made a most beautiful picture. But it is past and tomorrow morning we shall probably only see the grey outline of the surrounding hills. We are however as yet only a few miles from the town. It is now about 10 oclock and we have been becalmed for several hours. The night does its best to smooth our sorrow — the air is still and deliciously warm — the only sounds are the waves rippling on the stern and the sails idly flapping round the masts.

Already can I understand Humboldts enthusiasm about the tropical nights, the sky is so clear and lofty, and stars innumerable shine so bright, that like little moons they cast their glitter on the waves.
Posted by Arborfield at 08:13