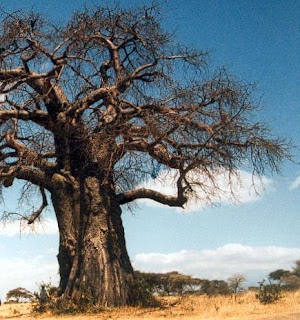 St Jago
After our one oclock dinner, Wickham, the Captain and myself walked to the famous Baobob tree and measured it more accurately. Cap FitzRoy first took an angle by a pocket sextant and afterward climbed the tree and let down a string, both ways gave the same result, viz. 45 feet in height. Its circumference measured 2 feet from the grounds (there being no projecting roots) gave 35. Its form is oval, and its greatest visible diameter was 13 feet. So that in an accurate drawing its breadth height would be 3.4 of its height breadth. Cap FitzRoy made a sketch which gave a good idea of its proportion, yet in this the height was only about 2.4 of breadth. Proving, what one so often observes, that a faithful delineation of Nature does not give an accurate idea of it. We returned home, after our merry and pleasant walk, just as it was dark.
A very pretty schooner came in this morning: it is strongly suspected that she is a slaver in disguise, she says she is a general trader to the coast of Africa. The Captain means to overhaul her in the morning and make out what she is. I suppose every thing is well concealed, else she would not have come into a harbour where a pennant was flying.
Posted by Arborfield at 08:27