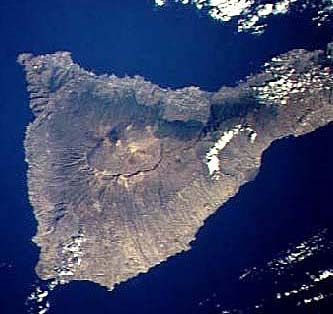 Teneriffe to C.Verde Islands
We were beating about during the night with a light baffling wind and in the morning a most glorious view broke upon us. The sun was rising behind the Grand Canary and defined with the clearest outline its rugged form. Teneriffe, grey as yet from the morning mist, lay to the West: some clouds having floated past, the snowy peak was soon in all its grandeur. As the sun rose it illumined this massive pyramid, parts of which either stood relieved against the blue sky or were veiled by the white fleecy clouds: all rendered the scene most beautiful and varied. Such moments can and do repay the tedious suffering of sickness.
We stood on a tack in direction of Santa Cruz; but were soon becalmed before reaching it. The day has been one of great interest to me: every body in the ship was in activity, some shooting, others fishing, all amused. No one could withstand such delightful weather, nothing reminded one that there were are such extremes as hot or cold. During the day we frequently saw the Cone, but the rest of the mountain even to the waters edge was hidden — it is then that its extreme height most strikes one. Some old paintings, where you see Jupiter and other gods quietly conversing on a rock amongst the clouds do not give a very exaggerated idea of the Peak of Teneriffe.
A fine breeze is now blowing us from its coast: one has read so many accounts of this island, that it is like parting from a friend; a different feeling from what I shall experience when viewing the Andes.
Posted by Arborfield at 07:51