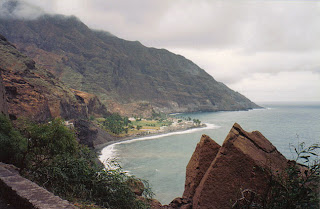 St Jago
This morning the view was very fine, the air being singularly clear and the mountains were projected against dark blue or black clouds. Judging from their appearances I should have thought the air was saturated with moisture. The Hygrometer proved the contrary, the diff: between Temp and Dew point being 29.6: this is nearly double what it has been any other morning: on the 20thand 21st it was 15.5. The dew formed at 42.2 and atmosphere was 71.8. On the previous morning the diff was only 8.8: and dew point 64,4. This uncommon dryness of the air was accompanied by continued flashes of lightning, consequent I suppose on the great change from unusual dampness to such extreme dryness.
The whole of this day I have been working very hard with microscope at yesterdays produce.
Posted by Arborfield at 09:03