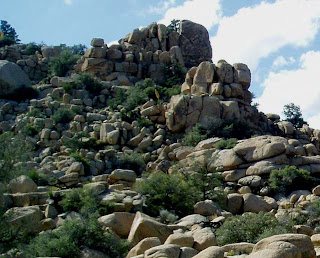 St Jago
Walked with Maccormick to Flag Staff Hill. We passed over an extended plain of table land. There was scarcely one green leaf on the whole tract, yet large flocks of goats, together with some cattle, contrive to live. It rains but very seldom in this country and when it does a mass of vegetation springs up; this soon drys up and withers: and upon this such miserable sort of hay that the animals exist: at present it has not rained for a year, and I suppose will not till the proper time next year, viz. November and October. At these periods the island is very unhealthy: one ship some years past lost six of its junior officers.

A little to the North of the hill, we found a very curious ravine, not much above 30 yards across, about 200 feet high. We with some difficulty found one single path at the very end, where we descended. In this wild dell we found the building places of many birds. Hawks and Ravens and the beautiful Tropic bird were soaring about us: a large wild cat bounded across and reached its den before Maccormick could shoot it. The place seemed formed for wild animals: large blocks of rocks, entwined with succulent creepers and the ground strewed over with bleached bones of Goats would have been a fine habitation for a Tiger.
Posted by Arborfield at 22:47