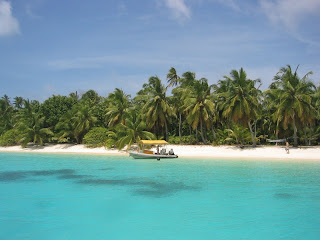 In the morning we stood out of the Lagoon.  I am glad we have visited these ; such formations surely rank high amongst the wonderful objects of this world.  It is not a wonder which at first strikes the eye of the body, but rather after reflection, the eye of reason.  We feel surprised when travellers relate accounts of the vast piles & extent of some ancient ruins; but how insignificant are the greatest of them, when compared to the matter here accumulated by various small animals.  Throughout the whole group of , every single atom, even from the most minute particle to large fragments of rocks, bear the stamp of once having been subjected to the power of organic arrangement.  Capt.  FitzRoy at the distance of but little more than a mile from the shore sounded with a line 7200 feet long, & found no bottom.


Hence we must consider this Isld as the summit of a lofty mountain; to how great a depth or thickness the work of the Coral animal extends is quite uncertain.  If the opinion that the rock-making Polypi continue to build upwards, as the foundation of the Isld from volcanic agency, after intervals gradually subsides, is granted to be true; then probably the Coral limestone must be of great thickness.  We see certain Isds in the Pacifick, such as Tahiti & Eimeo, mentioned in this journal, which are encircled by a Coral reef separated from the shore by channels & basins of still water.  Various causes tend to check the growth of the most efficient kinds of Corals in these situations.  Hence if we imagine such an Island, after long successive intervals to subside a few feet, in a manner similar, but with a movement opposite to the continent of S.  ; the coral would be continued upwards, rising from the foundation of the encircling reef.  In time the central land would sink beneath the level of the sea & disappear, but the coral would have completed its circular wall.  Should we not then have a ? — Under this view, we must look at a Lagoon Isd as a monument raised by myriads of tiny architects, to mark the spot where a former land lies buried in the depths of the ocean.


The Beagle stood over to the , distant about 12 miles.  This likewise is a small Lagoon Isd, but its centre is nearly filled up: the entrance is not deep enough even for a boat to enter.  — The plan being completed; in the evening a course was taken for the Isle of France.

Captain Fitzroy’s Journal
On the 12th we sailed, carrying a good sea-stock of cocoanuts, pigs, poultry, pumpkins, and turtle. Maize and sugarcane might have been had, if wanted. We first went round the northern Keeling:—on this island, about a mile across and but a few feet above the ocean, two English vessels have been lost since 1825, and probably other ships met a similar fate there in earlier years, when its existence was hardly known. We found the current setting towards the north-west, as I had been led to expect; but, from what I could observe, during our stay, as well as from oral information, I am led to believe that the current only sets strongly during about the last half of the flood tide, and the first half of the ebb; and that during the other six hours there is little or no current; as is the case off Cape Horn, and in many other places.
Syms Covington Journal


Sailed from the Cocos, April 12th for the Isle of France; from here we had the Trade Winds the whole passage, a distance of about 2200 miles.  During our passage we had frequent heavy showers of rain with but little wind, AS about the middle of April the hurricanes are all over.
Posted by Arborfield at 08:07