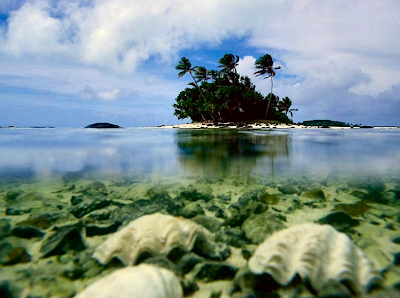 Captain Fitzroy’s Journal
The manner of ascending tall palm-trees is similar to that described at Otaheite, and requires strength as well as agility: both which are also shown by these Malays in their chases after turtle among the shallows and coral 'thickets' of the lagoon, where they abound. A party of men go in a light boat and look for a fine turtle in some shallow place. Directly one is seen, they give chase in the boat, endeavouring to keep it in a shallow, and tolerably clear place, till it begins to be tired by its exertions to escape; then, watching a favourable moment, a man jumps out of the boat and seizes the turtle. Away it darts, with the man on its back grasping its neck until he can get an opportunity, by touching ground with his feet, to turn it over, and secure his prize. Only the more active men can succeed well in this sort of fishing.
Other unusual things were seen by us at this place, one or two of which I will mention. There are fish that live by feeding upon small branches of the coral, which grows in such profusion in the lagoon. One species of these fish is about two feet and a half long, of a beautiful green colour about the head and tail, with a hump on its head, and a bony kind of mouth, almost like that of a turtle, within which are two rows of saw-like teeth. Mr. Stokes saw a dog, (bred on the island), catch three such fish in the course of a few hours by chasing them in shallow water, springing after them, almost as a kangaroo springs on land. Sometimes one would take shelter under a rock, when the dog would drive it out with his paw, and seize it with his mouth as it bolted.
Syms Covington Journal
Only one genus of land bird here, viz. the land rail, indigenous to THESE islands. A great many sea birds and very tame, as to let you come close to the them or within a yard or two. THEY build their nests on the trees close to beach. On this Island were great numbers of the land rail, about several houses. The Java sparrow WAS brought here.
Outside of THE Basin, round the islands at seven tenths of a mile from THE beach, soundings 100 fathoms; a mile out, no bottom. AT THE southernmost part of basin a channel is cut through coral for the boats, and stakes drove in different places to mark the channel. Even then, you are very apt to run foul of or branches of coral. WE had a pilot in the boat.
Posted by Arborfield at 07:44