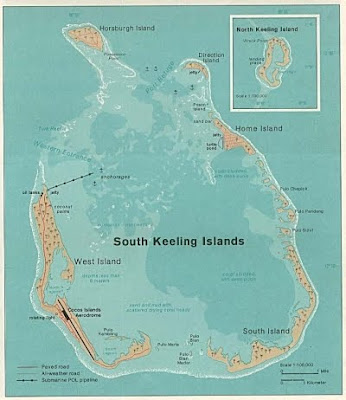 Anchored in the Basin, Keeling or , after having a heavy breeze the last two or three days of our passage.

The Islands ARE all very low; the beaches appear to be the highest. AND the highest I should suppose not more than twelve to fifteen feet high; all coral, about forty in number, the largest not more than ten miles long. The islands are complete forests of cocoa nut trees; if not for THE trees, the land would be seen FROM but a very short distance. ONE can wade from one island to another when the tide is low, to nearly all except THE entrance to THE Basin, which Basin is formed by the islands being as placed to form a circle. The Basin IS about twelve miles across. ONE cannot go far in with A ship; we anchored in seven or eight fathom OF water; coral bottom with white sand, the water always being clear. Beautiful branches of coral can be seen from the ship's side, the fish constantly passing and repassing amongst the coral, has a most beautiful effect, etc.

An Englishman and HIS family, with about sixty or seventy Mulattos from the , live on one of the islands.