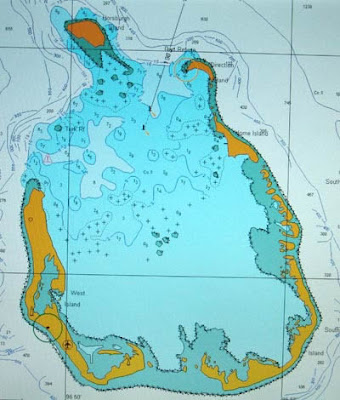 During these days nearly every one was employed in parts of the examination of the Island; but the winds being very strong rendered the most important part, the deep sea sounding, scarcely practicable. I visited Horsburgh & West Isd. — In the latter the vegetation is perhaps more luxuriant than in any other part. Generally the Cocoa nut trees grow separate, but here the young ones flourish beneath their tall parents & formed with their long & curved fronds the most shady arbors. Those alone who have tried it, can tell how delicious it is to be seated in such shade & there drink the cool pleasant fluid of the Cocoa nut which close by hangs in great bunches. In this Isd there is a large bay, or little lagoon, composed of the finest white sand; it is quite level & is only covered by the tide at high water. From this large bay smaller creeks penetrate the surrounding woods; thus to see a field of glittering sand representing water, & around the border of which the Cocoa nut trees extend their tall waving trunks, formed a singular & very pretty view.
Captain Fitzroy’s Journal


Except sea-fowl and the domestic creatures which have accompanied man to the Keelings, there is no bird or animal; but a kind of land-rail, which is numerous. Besides the palm there are upon the largest islets other trees, particularly a kind of teak, and some less valuable wood, from which a vessel was built.

Fresh water is not scarce on the larger islets of the group, but it is only to be got by digging wells in the coral foundation, covered as it is by vegetation. In these wells, about six feet deep, the water rises and falls as the tide of the ocean flows and ebbs; which I believe to be the case at most other coral islands where there is fresh water. It appears that the fresh water of heavy rains is held in the loose soil, (a mixture of coral, sand, and decayed vegetable substances,) and does not mix with the salt water which surrounds it, except at the edges of the land. The flowing tide pushes on every side, the mixed soil being very porous, and causes the fresh water to rise: when the tide falls the fresh water sinks also. A sponge full of fresh water placed gently in a basin of salt water, will not part with its contents for a length of time if left untouched. The water in the middle of the sponge will be found untainted by salt for many days; perhaps much longer, if tried.
Posted by Arborfield at 07:19