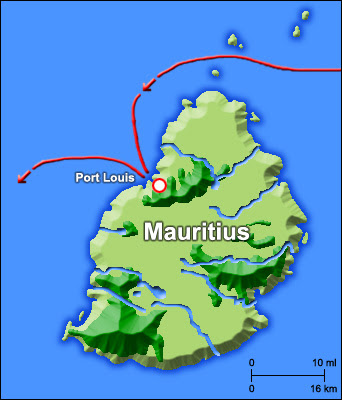 In the morning we passed round the northern extremity of the Isle of France or Mauritius. From this point of view the aspect of the island equalled the expectations raised by the many well known descriptions of its beautiful scenery. The sloping plain of the Pamplemousses, scattered over with houses & coloured bright green from the large fields of sugar cane, composed the foreground. The brilliancy of the green was the more remarkable because it is a colour which generally is only conspicuous from a very short distance. Towards the centre of the island groups of wooded mountains arose out of the highly cultivated plain, their summits, as so commonly happens with ancient volcanic rocks, being jagged by the sharpest points. Masses of white clouds were collected around these pinnacles, as if merely for the sake of pleasing the stranger's eye. The whole island, with its sloping border & central mountains, was adorned with an air of perfect elegance; — the scenery, If I may use such an expression, appeared to the senses harmonious.
Shortly after midday we came to an anchor at Port Louis.

Captain Fitzroy’s Journal
We anchored in Port Louis, at the Mauritius, on the 29th of April.

Anchored ship in Port Louis, Mauritius or Isle of France, April 29th. Passed several small islands very near the main island previous to entrance in port, and very low point of Isle. The sea shore very low and flat, until the base of the mountains. Mountains rise very abruptly, their tops very rugged. Some run up like pinnacles, their height 2,000 to 3,000 feet.
Posted by Arborfield at 07:22