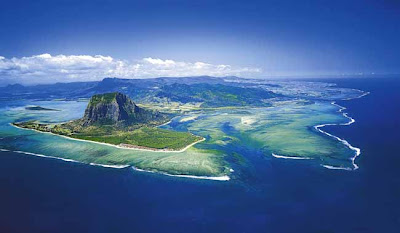 I spent the greater part of the next day in walking about the town & visiting different people. The town is of considerable size, & is said to contain 20,000 inhabitants; the streets are very clean & regular. Although the island has been so many years under the English government, the general character of the place is quite French. Englishmen speak to their servants in French, & the shops are all French; indeed I should think that Calais or Boulogne was much more Anglefied. There is a very pretty little theatre, in which operas are excellently performed, & are much preferred by the inhabitants1 to common plays. We were also surprised at seeing large booksellers shops with well stored shelves: — music & reading bespeak our approach to the old world of civilization, for in truth both Australia & America may be considered as New Worlds.
Syms Covington Journal
THE town IS situated nearly at THE base of the highest mountains, and gradual ascent from the coast, with small race ground at THE back of town. The port is very snug, and a good anchorage, with a fort on each side of Outside of THE Basin, round the islands at seven tenths of a mile from THE entrance, which entrance is about a quarter of a mile wide. THERE ARE moorings for three men of war, viz. line of battle ship, frigate and sloop.
Here THERE are frequent squalls, or showers of rain, occasioned by the mountains back of town, which break the clouds in their passage. Fort Adelaide, now building, is said will be bomb proof when finished. IT will contain all the English on the island with provisions for seven years, AND commands the town and harbour, by being situated AT THE back of town and TO THE left of race ground. THERE are situated here 2500 soldiers, the general standard complement. Paul and Virginia's graves seven miles from town.
The town is laid out, like Spanish towns in South America, viz. in squares. THE houses ARE nearly all built of wood. Here the scene was greatly changed from the Spanish style, to the Eastern or turbaned heads, with their long white (sort of) tunicks, with the white trousers of some. Their large pipes, etc. having a very novel appearance. THERE WERE people from various nations, both from Europe and the East. Here silks, etc. are very little cheaper than in England.
Posted by Arborfield at 08:53