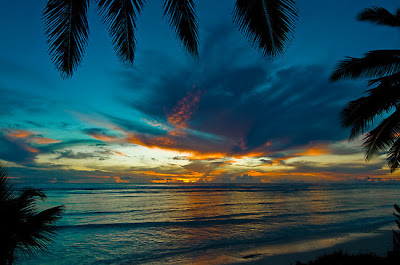 A word about the inhabitants, and I leave the Keelings. No material difference was detected by me between the Malays on these islands, and the natives of Otaheite or New Zealand. I do not mean to assert that there were not numbers of men at each of those islands to whom I could not trace resemblances (setting individual features aside,) at the Keelings; I merely say that there was not one individual among the two hundred Malays I saw there whom I could have distinguished from a Polynesian Islander, had I seen him in the Pacific.

Two boys attracted my notice particularly, because their colour was of a brighter red than that of any South American or Polynesian whom I had seen, and upon enquiry I found that these two boys were sons of Alexander Hare and a Malay woman.
Excepting the two English families I have mentioned, all on the Keelings in 1836, were Mahometans. One of their number officiated as priest; but exclusive of an extreme dislike to pigs, they showed little outward attention to his injunctions. As no Christian minister had ever visited the place, and there was no immediate prospect of one coming there, I was asked to baptize the children of Mrs. Leisk. So unusual a demand occasioned some scruples on my part, but at last I complied, and performed the appointed service in Mr. Ross's house; where six children of various ages were christened in succession. This and other facts I have mentioned respecting these sequestered islands shew the necessity that exists for some inspecting influence being exercised at every place where British subjects are settled. A visit from a man of war, even once only in a year, is sufficient (merely in prospect) to keep bad characters in tolerable check, and would make known at head quarters the more urgent wants of the settlers.
In observing the sun's meridian altitude at this place, the sextants were used, which I have adverted to before, and the latitude deduced from their results only differed two or three seconds from that obtained by stars, without using the additional glass: I forgot to say, in speaking of the Galapagos, how useful those instruments were there; enabling us to measure the sun's meridian altitude in an artificial horizon when nearly eighty degrees high. I would not say this in favour of my own invention, if I did not feel certain that seamen will find it useful, and that somebody ought to tell them of it, for their own sake. (These sextants were made by Worthington.)
Posted by Arborfield at 20:47