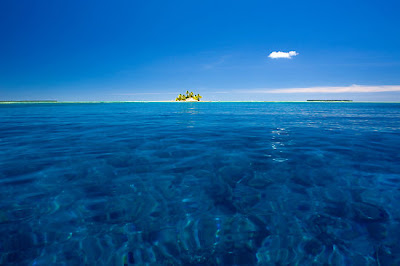 I accompanied Capt. FitzRoy to an island near the head of the Lagoon; the channel was exceedingly intricate, winding through fields of delicately branched Corals. We saw several turtle & two boats were then employed in catching them. — The method is rather curious; the water is so clear & shallow that although at first the turtle dives away with much rapidity, yet a canoe or a boat under sail will after no very long chase overtake it; a man standing ready in the bows at this moment dashes through the water upon its back. Then clinging with both hands by the shell of the neck, he is carried away till the turtle becomes exhausted & is secured. It was quite an interesting chase to see the two boats doubling about, & the men dashing into the water till at last their prey was seized.
When we arrived at the head of the lagoon we crossed the island, & found a great surf breaking on the windward coast. I can hardly explain the cause, but there is to my mind a considerable degree of grandeur in the view of the outer shores of these Lagoon Islands. There is a simplicity in the barrier-like beach, the margin of green bushes & tall Cocoa nuts, the solid flat of Coral rock, strewed with occasional great fragments, & the line of furious breakers all rounding away towards either hand. The ocean throwing its waters over the broard reef appears an invincible all-powerful enemy, yet we see it resisted & even conquered by means which would have been judged most weak & inefficient. The little sketch of Whit sunday Isd in Capt. Beechey's voyage, gives as accurate an idea of the scene as can be well imagined. We did not return on board till late in the evening, as we staid sometime in the lagoon, looking at the Coral fields & collecting specimens of the giant Chama.
Robert Fitzroy Journal


Among the great variety of corals forming the walls around the immediately visible basement, and the under-water forests of the Keeling islands, there is more difference than between a lily of the valley and a gnarled oak. Some are fragile and delicate, of various colours, and just like vegetables to the eye, others are of a solid description, like petrified tropical plants; but all these grow within the outer reef, and chiefly in the lagoons.

The wall, or outer reef, about which so much has been said and thought, by able men, without their having arrived at any definite conclusion, is solid and rock-like, with a smooth surface; and where the surf is most violent, there the coral is fullest of animated matter. I was anxious to ascertain if possible, to what depth the living coral extended, but my efforts were almost in vain, on account of a surf always violent, and because the outer wall is so solid that I could not detach pieces from it lower down than five fathoms. Small anchors, hooks, grappling irons, and chains were all tried—and one after another broken by the swell almost as soon as we 'hove a strain' upon them with a 'purchase' in our largest boats. Judging however, from impressions made upon a large lead, the end of which was widened, and covered with tallow hardened with lime, and from such small fragments as we could raise, I concluded that the coral was not alive at a depth exceeding seven fathoms below low water. But this subject has been, or will be, fully discussed by Mr. Darwin, therefore I need say no more.

As if in speaking of these singular, though so small islands,—where crabs eat cocoa-nuts, fish eat coral, dogs catch fish, men ride on turtle, and shells are dangerous man-traps,—any thing more were necessary to ensure the voyager's being treated like the old woman's son who talked to her about flying-fish,—it must yet be said that the greater part of the sea-fowl roost on branches, and that many rats make their nests at the top of high palm-trees.
Posted by Arborfield at 07:55