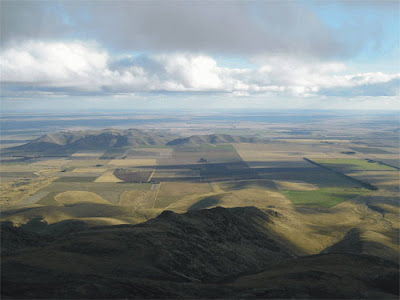 Patagones to Buenos Ayres
We started early in the morning, but owing to some horses being stolen we were obliged to travel slow & accompany the Cargeroes or loaded horses. The distance between Patagones & the pass of the Colorado is 85 miles, & in all this distance there are only two springs of fresh water. They are called fresh, but even at this season were very brackish; in summer this must be a very disagreeable passage; from the heavy rain of yesterday we were well off, for there were several small puddles in the waggon ruts. We passed several small Salinas & in the distance there was one which was at least 3 or 4 leagues in length. The country has one universal appearance, brown withered grass & spiny bushes; there are some depressions & valleys.

Shortly after passing the first spring we came in sight of the famous tree, which the Indians reverence as a God itself, or as the altar of Walleechu. It is situated on a high part of the plain & hence is a landmark visible at a great distance. As soon as a tribe of Indians come in sight they offer their adorations by loud shouts. The tree itself is low & much branched & thorny, just above the root its apparent diameter is 3 feet. It stands by itself without any neighbour, & was indeed the first tree we met with; afterwards there were others of the same sort, but not common.

Being winter the tree had no leaves, but in their place were countless threads by which various offerings had been suspended. Cigars, bread, meat, pieces of cloth &c &c., poor people only pulled a thread out of their ponchos. The Indians both pour spirit & mattee into a hole & likewise smoke upwards, thinking thus to afford all possible gratification to Walleechu. To complete the scene the tree was surrounded by the bleached bones of horses slaughtered as sacrifices. All Indians of every age & sex make their offerings, they then think that their horses will not tire & that they shall be prosperous. In the time of peace the Gauchos who told me this had been witnesses of the scene; they used to wait till the Indians passed on & then steal from Walleechu their offerings. The Gauchos think that the Indians consider the tree itself as a God; but it seems far more probable that it is an altar. The only cause which I can imagine for this choice, is its being a landmark in a dangerous passage.

The Sierra de la Ventana is visible at an immense distance & a Gaucho told me, that he was once riding with an Indian a few miles to the North of the R. Colorado when the latter began making the same noise which is usual at the first sight of the tree, & putting his hand to his head & then in the direction of the Sierra. Upon being asked the reason of this the Indian said in broken Spanish "first see the Sierra". This likewise would render it probable that the utility of a distant landmark is the first cause of its adoration.

About two leagues beyond this very curious tree we halted for the night: at this instant an unfortunate cow was spied by the lynx-eyed Gauchos. Off we set in chase & in a few minutes she was dragged in by the Lazo & slaughtered. We here had the four necessaries for life "en el campo",-pasture for the horses, water (only a muddy puddle), meat & fire wood. The Gauchos were in high spirits at finding all these luxuries, & we soon set to work at the poor cow. This was the first night which I passed under the open sky with the gear of the Recado for a bed. There is high enjoyment in the independence of the Gaucho life, (a) to be able at any moment to pull up your horse and say here we will pass the night. The death-like stillness of the plain, the dogs keeping watch, the gipsy group of Gauchos making their beds around the fire, has left in my mind a strongly marked picture of this first night, which will not soon be forgotten.
Posted by Arborfield at 07:54