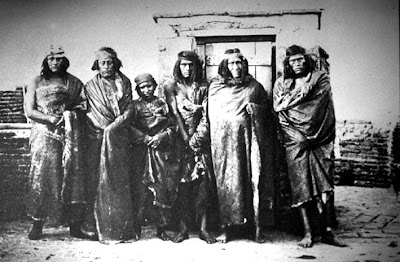 [Patagones Indians]
Rio Negro
Rode with Mr Stokes to the town of Patagones situated about 18 miles up the river; it was a pleasant ride, the road generally lying at the foot of the sloping cliff which forms Northern bank of the great valley of the R. Negro. We passed the ruins of some fine Estancias, which a few years since were destroyed by the Indians. They withstood several attacks; a man present at one gave me a very lively description of what took place. The Spaniards had sufficient notice to drive all the cattle & horses into the Corral which surrounded the house, & likewise to mount some small cannon. The Indians were Araucanians from the South of Chili; several hundred in number & highly disciplined. They first appeared in two bodies on a neighbouring hills; having there dismounted & taken off their fur mantles, they advanced naked to the charge (with exception of Nutria skin round waist). The only weapon of an Indian is a very long bamboo or Chusa ornamented with Ostrich feathers and pointed by a sharp spear head. My informer seemed to remember with the greatest horror, the quivering of these Chusas as they approached near. When close, the Cacique Pinchera, hailed the besieged to give up their arms or he would cut all their throats. As this would probably have been the result of their entrance under any circumstances, the answer was given by a volley of musketry. The Indians with great steadiness came to the very fence of the Corral, to their surprise they found the posts fastened together by iron nails instead of leathern thongs, & of course in vain attempted to cut them with their knives. This saved the lives of the Christians: many of the Indians were carried away by their companions, & at last one of the under Caciques being wounded the bugle sounded a retreat. They retired to their horses & seemed to hold a council of war. This was an awful pause for the Spaniards, as all their ammunition with the exception of a few cartridges was expended. In an instant the Indians mounted their horses & galloped out of sight.
.
Another attack was still shorter; a cool Frenchman managed the gun, he stopped till the Indians had approached very close & then raked their line with grape shot. He thus laid thirty nine of them on the ground. Of course such a blow immediately routed the whole party.
Posted by Arborfield at 07:00