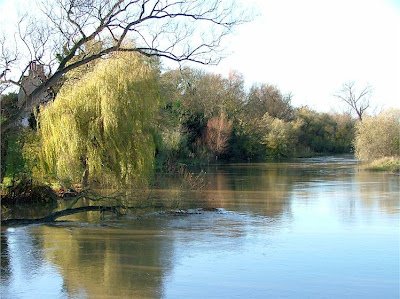 Patagones to Buenos Ayres
Our distance was not more than 3 leagues from the R. Colorado; we soon left the desert sandstone plain & came to one of turf, with its flowers clover & little owls, the usual characteristic features of the Pampas. We passed a muddy swamp of considerable extent, which is occasionally overflowed by the Colorado. It is a Salitràl that in summer is encrusted with saltpetre & hence is covered with the same species of plants which grow on the sea beach.

We then arrived at the Colorado. The pass is about 9 leagues in a direct line from the mouth, but by water it is said to be not much less than 25. Its width here is about 60 yards generally it must be once & half as wide as the Severn at Shrewsbury. The tortuous course of the river is marked by numerous willow trees & beds of reeds. We were delayed crossing in the canoe by some immense troops of mares, which were swimming the river in order to follow the march of a division of troops into the interior. Mares flesh is the only food of the soldiers when thus employed. This gives them a very great facility in movement; for the distance & length of time horses can be driven over these plains is quite surprising. I have been assured an unloaded horse will travel 100 miles for many days successively.

The encampment of General Rosas is close to the river; it is square of 3 or 400 yards, formed by waggons, artillery, straw huts &c. The soldiers are nearly all Cavalry; believe such villainous Banditti-like army was never before collected together: the greater number of men are of a mixed race, between Negro, Indian & Spaniard: I know not the reason, but men of such origin seldom have good expressions.

I called on the Secretary to show my passport; he began to cross question me in a most dignified & mysterious manner. By good luck I had a letter of recommendation from the Government of B. Ayres to the Commandante of Patagones. I am bound to express in the strongest terms my obligation to the government of Buenos Ayres for the most obliging manner in which passports to all parts of the country was given me as Naturalist of the Beagle.) his was taken to General Rosas, who sent me a very obliging message & the Secretary returned all smiles & graciousness. We took up our residence in the Rancho or hovel of a curious old Spaniard, who had served with Napoleon in the expedition against Russia.
Posted by Arborfield at 07:34