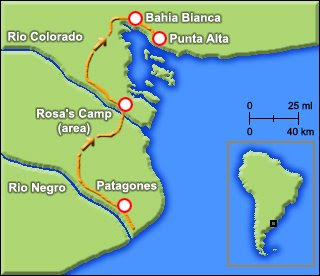 Rio Negro
Crossed the river & took a long walk to examine the South Barranca; the country is a level plain, which on the coast forms a perpendicular cliff about 120 feet high, having walked several miles along the coast, I with difficulty found a pass to ascend to the plain above. This plain has a very sterile appearance it is covered with thorny bushes & a dry looking grass, & will for ever remain nearly useless to mankind. It is in this geological formation that the Salinas or natural salt-pans occur; excepting immediately after heavy rain no fresh water can be found. The sandstone so abounds with salt, that all springs are inevitably very brackish. The vegetation from the same cause assumes a peculiar appearance; there are many sorts of bushes but all have formidable thorns which would seem to tell the stranger not to enter these inhospitable plains.
.
Captain Fitzroy’s Journal:
… there is now a mass of banks extending far to seaward, which make the coast from Blanco Bay to San Blas extremely dangerous; more particularly, as the adjoining shore is almost a dead flat, and so low, that in many parts it can only be seen when the observer is among, or upon, the shoals. The space between Union Bay and San Blas was very appropriately named by the Spaniards Bahia Anegada (dried up bay), because it is so shallow, and the inner parts are rather drowned land than actual water, being only covered at half tide. Falkner says, that a Spanish vessel was lost in this bay, the crew of which "saved themselves in one of the boats, and sailing up the river arrived at Mendoza." Whether this ship was called 'Los Cesares' I am not aware, but as there is an islet in the 'Bahia Anegada' named in the old Spanish charts, 'Isla de los Cesares,' I suspect that such was the fact, and incline to connect this story with the many rumours of a settlement, 'de los Cesares,' somewhere in the interior of Patagonia. Falkner says, that "the crew saved themselves in one of the boats;"* but there were few Spanish vessels about that coast in the early part of the eighteenth century whose whole crew could have been saved in one of their boats.† If the remainder had formed even a temporary encampment about San Blas, or near the river Negro, it would have been described, with much exaggeration, by Indians of the west, as well as by those of the East country. A few men might have been admitted into a tribe of Indians who improved their habits and dwellings, so far as to have given rise to the curious reports so much circulated in South America, during the last century and even in this—of a colony of white people, with houses and gardens, in the interior of the continent, somewhere about the latitude of forty degrees; according to some between two ranges of the Cordillera; others said it was in the plains; but all appeared to think there was no doubt of the existence of such a settlement.
.
* "In the year 1734, or thereabouts (within how many years after or before that time?), the masts and part of the hulk were seen," (Falkner, p. 77.) The so-called 'Isla de los Cesares' is closely attached to, if not a part of the main land at the west side of Anegada Bay.
.
† Reports of the Cesares began to be circulated in the early part of the eighteenth century.
.
In Villarino's Diary of his Exploration of Anegada Bay, I find that he was much assisted by horses and mules, which he carried on board his vessels, and landed as often as he had occasion to make a journey by land. At the river Negro I heard that some of these animals became so tame, and accustomed to landing and embarkation, that they would leap quietly into or out of the boats, when required.
Posted by Arborfield at 07:16