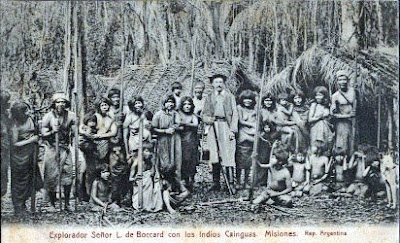 Patagones to Buenos Ayres
The weather was miserable & I had nothing to do: the surrounding country is a swamp & in (December) summer overflowed by the Colorado, which collects the snow water on the Cordilleras. My chief amusement was watching the Indian families as they came to buy little articles at the Rancho where I stayed. is said that General Rosas has about six hundred Indian allies. They certainly were very numerous. The men are a tall exceedingly fine race; yet it is easy to see the same countenance, rendered hideous by the cold, want of food & less civilization, in the Fuegian savage. Some authors in defining the primary races of man have separated these two classes of Indians, but I cannot think this is correct. Amongst the young women, or Chinas, some deserved to be called even beautiful; their hair is coarse but exceedingly bright & black; they wear it in two plaits hanging down to the waist. They have a high colour & eyes which glisten with brilliancy. Their legs, feet & arms are small & elegantly formed. Round the wrist & ankle they wear broad bracelets of blue beads. Nothing could be more interesting than some of the family groups. Two or three Chinas (women) ride on one horse; a mother with her two daughters would thus often come to buy sugar & Yerba. They mount their horses with much delicacy; the horses have a broad band round their necks, which reaches just below the chest; this they use as a stirrup, but stand, when using it, even more in front of the horse than a man does. When on, they ride like a man, but with their knees tucked up much higher. When travelling, the Chinas always ride the loaded horses, hence perhaps this habit. Their duty is likewise to pack & unpack the horses & make the tents for the night; they are in short, like the wives of all Savages, useful slaves.

The men fight, hunt, take care of the horses & make the riding gear: One of their chief in doors occupation is the continual knocking of two stones together, till they are both round. The bolas or balls are very important weapons with the Indian; he catches his game, & his wild horses with them; in fighting his first attempt is to throw his adversaries horse, & when entangled by the fall to kill him with the Chusa or long spear. If the balls only catch the neck or body of an animal, they are often carried away & lost. As the mere making of the stones round is the labour of two days, the manufacture of the balls is the most usual employment of the Indians. Several of the men & women had their faces painted red, but I never saw the horizontal bands so common amongst the Fuegians. Once I saw a man with a little blue circle & straight line leading from it beneath each eye: Their chief pride is having all their things made of silver. I have seen a Cacique with silver stirrups, spurs, head-gear of silver chain, handle of knife &c. &c. — & occasionally some silver ornaments in the hair. From presents of General Rosas, their clothing was generally cloth, with some little fur. They all had recado's, iron bits, & stirrups.
Posted by Arborfield at 07:07

The picture shows indians Caingua, from Misiones, thousands of miles north of Patagonia.