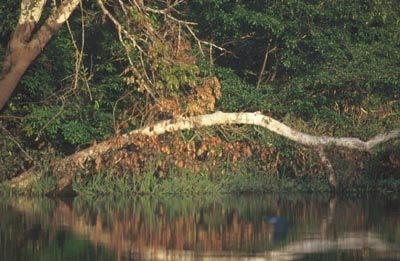 Rio Negro
The town is built on the cliff which faces the river; many of the houses are actually excavated in the Sandstone. The river is here about four times as wide as the Severn at Shrewsbury & the stream rapid. The many islands, with their willow trees & the headlands one seen behind the other, forming the Northern boundary of the flat valley, form by the help of the rising sun a view almost picturesque. The number of inhabitants is not great, there are many Indians & Spaniards of pure blood & a far less mixture of the two races than is common in these countries.

The tribe of the Cacique Leucanee constantly have their Toldos outside the town. Government supports them by giving them all the old horses to eat. They also work in making Horse-rugs, boots of the horses legs &c. What their character may have gained by lessening their ferocity, is lost by their entire immorality. Some of the younger men are however improving; they are willing to labour, & the other day a party agreed to go on a sealing voyage & behaved very well. They were now enjoying the fruits of their labour, by being dressed in very gay, clean clothes & being very idle. The taste they show in their dress is admirable; if you could turn one of these young Indians into a statue of bronze, the drapery would be perfectly graceful.
.
In spite of its name of Negro ("black") the colour is more greenish than black. Nevertheless, the name is the literal translation of its aboriginal Mapuche name of Curú Leuvú. The river was also known by the name of Río de los Sauces (River of Willows) for the abundant weeping willows at its shores. [Wikipedia]
Posted by Arborfield at 19:52

It is strange that in today' technology,there are some tribes in South America who live like primates.

???
But they ARE primates. As am I. And you to, unless a blattarian somehow figured out how to comment on a blog.