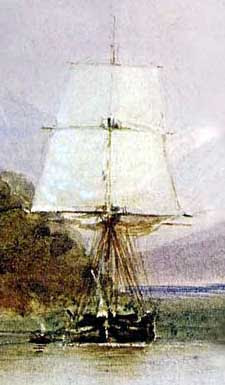 Patagonas to Buenos Ayres
I was anxious to see if the Beagle was in the mouth of the Bay. The Commandante lent me a soldier as guide & two horses; on the road we picked up two more; yet they were all such miserable horses, that one was left behind & the three others could hardly reach Anchor Stock hill, a distance of about 25 miles, where the Ship waters. My guide two months ago had a wonderful escape, he was out hunting with two companions, only a few leagues from the fort, when a party of Indians appeared, they balled the other two men & killed them. They then balled his horse, he jumped off & with his knife liberated the horses legs. Whilst doing this he was obliged to dodge behind his horse & thus received two bad Chusa wounds. Seizing an opportunity, he sprung on his horse, & could just manage to keep ahead of the Chusas till within sight of the Fort, when the Indians gave up the chase. From that time, there was an order against any individual leaving the fort. I did not know all this till near the coast, & had been surprised to see how earnestly my guide watched a deer which appeared to have been frightened from some other quarter.

After two hours rest, & not seeing the Beagle, we made an attempt to return; but only could manage two or three leagues & even then left a horse behind. In the morning we had caught an Armadillo, which was but a poor breakfast & dinner for two men. Where we slept at night the whole ground was thickly encrusted with saltpetre & of course no water.

Captain Fitzroy’s Journal:
On the 19th of August, we anchored near the bar of the Negro, to meet the Paz and Liebre, take our officers and men on board, and pay Mr. Harris the money to which he was entitled, not only by contract, but by the uniform attention, activity, and thorough kindness, which he and his partner had shown to their temporary companions; by their knowledge as pilots, and by the useful information which they had readily given, to the full extent of their abilities. The complete success of that enterprise was greatly owing to the conduct of those two worthy men. Before dark all was settled, our party was safely on board; we quitted Harris and Roberts, with their useful little craft, mutually satisfied; and made sail for Blanco Bay, where there was still work to be done; intending to add to our already numerous soundings, while following the seaward edges of the banks.
Posted by Arborfield at 09:20