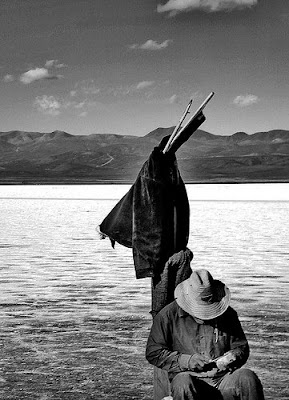 Rio Negro
Rode to the great Salina, which is worked for the exportation of its salt, it is situated about 15 miles up & 3 from the river, at this time it is nothing more than a large shallow lake of brine; but in summer it dries up & there is left a large field of snow white salt. Both on the banks of the river & on the edge of the lake there were heaps of many hundred tons ready for exportation. The working time is as it were the harvest for Patagones, the whole population encamps on the bank of the river & every morning with the bullock waggons the men go to the lake to draw out the salt & form the Montes. There are other Salinas which are more distant & these are many leagues in circumference & the salt several feet thick, a quantity sufficient to supply the world. Yet at M: Video they use English salt to make salted (On account of the salt petre) butter. So little do the inhabitants profit by the natural advantages of their country. In a like manner wheat in the province of B: Ayres produces an immense percentage yet a great deal of flour is imported from North America (on account of the Pobrillo or red blight.) Killing an animal & flaying it does not give much trouble, & hides in consequence are nearly the only produce which these indolent people care about.

Many of the geological facts connected with this Salina are curious & I returned highly satisfied with my ride.
Posted by Arborfield at 08:27