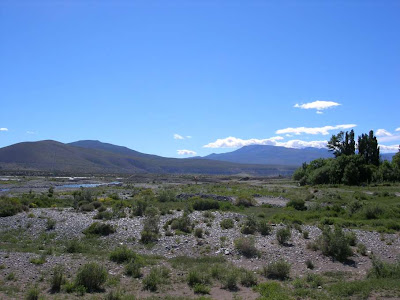 Patagones to Buenos Ayres
So tired of doing nothing, I hired the same guide & started for Punta Alta, which is not so distant & commands a good view of the harbor. I went this time better provided with bread & meat & horns with water & made up my mind to sleep there so as not to fatigue the horses. When not very far from our destination, the Gaucho spied 3 people on horse-back hunting. He immediately dismounted & watched them intently. He said they dont ride like Christians & nobody can leave the Fort. The three hunters joined company, & dismounted also from their horses, at last one mounted again & rode over the hill out of sight. The Gaucho said, "We must now get on our horses, load your pistol" & he looked to his sword. I asked are they Indians. Quien Sabe? (who knows?), if they are no more than three it does not signify. It then struck me that the one man had gone over the hill to fetch the rest of his tribe; I suggested this; but all the answer I could extort was, Quien sabe? His head & eye never for a minute ceased scanning slowly the whole horizon. I thought his uncommon coolness rather too good a joke; & asked him why he did not return home. I was startled when he answered: "We are returning, only near to a swamp, into which we can gallop the horses as far as they can go & then trust to our own legs. So that there is no danger". I did not feel quite so confident of this & wanted to increase our pace. He said, no, not until until they do. When any little inequality concealed us, we galloped, then but when in sight, continued walking. At last we reached a valley, & when turning to the left galloped quickly to the foot of a hill, he gave me his horse to hold, made the dogs lie down, & crawled on his hands & knees to reconnoitre. He remained in this position for some time & at last, bursting out in laughter, exclaimed: "Mugares" (women). He knew them to be the wife & sister in law of the Majors son, hunting for Ostriches eggs.
I have described the mans conduct because he acted under the full impression they were Indians. As soon however as the absurd mistake was found out, he gave me a hundred reasons why they could not have been Indians; but all these were forgotten at the time.
After this we proceeded on to Punta Alta and ate our dinner in peace & quietness. Punta Alta is the place where I found so many bones last year. I employed the evening in seeking for more & marking the places. There was a beautiful sunset & everything was deliriously quiet & still. But the appearances were false; an hour after being in bed, very heavy rain began, but I slept through it & was very little wet.
Posted by Arborfield at 20:48