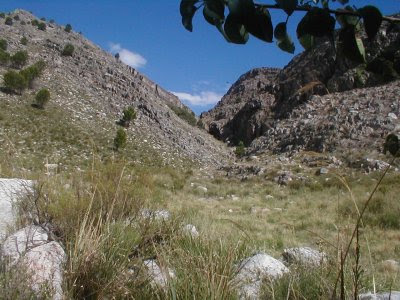 [Sierra Ventana]
Patagonas to B. Ayres
Started early in the morning. Mr Harris did not accompany me as he was not quite well, & I was anxious to arrive at Bahia Bianca, not knowing when the ship would be there. We passed the Toldos of the Indians, which are without the regular encampment. — They are little round ovens covered with hides, with the tapering Chusa stuck in the ground by its entrance. — They were divided into separate groups, which belonged to the different Cacique's tribes, & each group of huts were divided into smaller ones, apparently according to the relationship of the owners. — The first Posta lay along the course of the Colorado. — the diluvial plains on the side appeared fertile & it is said are well adapted for the growth of corn: the advantage of having willows trees will be very great for the Estancias which General Rosas intends making here. — This war of extermination, although carried on with the most shocking barbarity, will certainly produce great benefits; it will at once throw open four or 500 miles in length of fine country for the produce of cattle.

From the 2nd to 3rd Posta began the grand geological formation, which I believe continues the same to St Fe, a distance of at least 600 miles. — The country had a different appearance from that South of the Colorado: there were many different plants & grasses & not nearly so many spiny bushes, & these gradually became less frequent; untill a little to the North there is not a bush. — The plain is level & of a uniform brownish appearance; it is interrupted by nothing, till about 25 miles North of the river, with a belt of red dunes stretching as far as the eye reaches to the East & West. — These are invaluable in the country, for resting on the clay the [they] cause small lakes in the hollows & thus supply that most rare article, fresh water. The extreme value of depressions & elevations in the land is not often reflected on. — the two miserable springs in the long passage between the Rios Nigro & Colorado are formed by two trifling inequalities in the plain, without which there absolutely would be none & of course boring would be quite unsuccessful. — The belt of sand hills is about eight miles wide, on the Northern edge the fourth Posta is situated; as it was evening & the fresh horses were distant we determined to pass the night here. —

The house is at the base of a ridge between one & two hundred feet high, a most remarkable phenomenon in this country-from this ridge there was an excellent view of the Sierra Ventana, stretching across the country & not appearing as at Bahia Bianca as a solitary mountain. — This posta was commanded by a Negro Lieutenant born in Africa & to his credit be it said there was not a Rancho between the Colorado & B. Ayres in half nearly such neat order. He had a little room for strangers & a small Corral for the horses, all made of sticks & reeds. He had dug a ditch round the house, as a defence in case of being attacked; it would however be poor one if the Indians were to come. — His only comfort appeared to be that he would sell his life dear.

Some short time ago, a body of Indians had travelled past his house in the night. If they had been aware of the Posta our black friend & his four soldiers would assuredly have been slaughtered. — I did not anywhere meet a more obliging man than this Negro; it was therefore the more painful to see that he would not sit down and eat with us.
Posted by Arborfield at 19:54