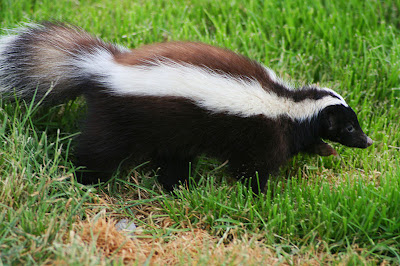 Patagones to Buenos Ayres
In the morning the rain did not cease, so we started on our return. In our path we saw a fresh track of a lion & commenced an unsuccessful chase: the dogs seemed to know what we were about & were not eager to find the beast.

.
In these plains a very curious animal, the Zorilla or Skunk, is sufficiently common. — Its habits resemble those of fitchet, but it is larger & the body much thicker in proportion. — Conscious of its power, it roams about the open camp by day & fears neither dogs or men. — if a dog is encouraged to attack one. — the fetid oil, which is ejected makes him instantly very sick & run at the nose. — Clothes once touched are for ever useless. — Every other animal makes room for the Zorilla.
.
On my return found my fellow traveller Harris arrived from the R. Colorado. A few days previously news had come that the Indians had murdered every soul in one of the Postas. — It was suspected that Bernantio's tribe, the same which the other day stopped here on the road to join General Rosas were the perpetrators. — Harris informed us, that a few miles from the Colorado he met these Indians, & that at the same instant an officer arrived bearing the following summary message, "that if Bernantio failed to bring the heads of the murderers, it should be his bitterest day for not one of his tribe should be left in the Pampas".
Posted by Arborfield at 16:34

That image is not the right species, is it? Darwin probably saw C. humboldtii, Humboldt's hog-nosed skunk.