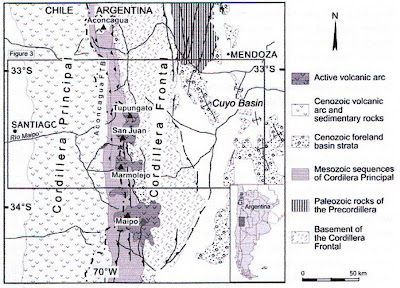 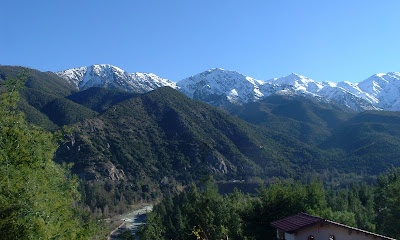 [Today -- 175 years ago of course -- Charles sets off to trek from Santiago in Chile to Mendoza in Argentina right across the top of the Andes. We will be following day by day, illustrated with photographs taken of his route -- today's being of the Maipo valley. Must admit it's nice to be introduced to Madrina. It's these little things that make the Diary quite so immediate.]

Santiago to Mendoza (Day 1) - Valle del Maipo
Started by the Portillo Pass for Mendoza. I took with me my former companion, Mariano Gonzales, & an Arriero with ten mules & the Madrina. The Madrina is a mare with a little bell round her neck; she is a sort of step-mother to the whole troop. — It is quite curious to see how steadily the mules follow the sound of the Bell, — if four large troops are grazing together during the night, the Muleteers in the morning have only to draw a little apart each Madrina & tinkle the Bell, & immediately the mules although 2–300 together, will all go to their proper troop. — The affection of the mules for the Madrina saves an infinity of trouble; if one is detained for several hours & then let loose, she will like a dog track out the Troop or rather the Madrina, for she seems the chief attraction. — Six of the mules were for riding & four for Cargoes; each taking turn about. — We carried a good deal of food, in case of being snowed up, as the season was rather late for passing by the Portillo.

Leaving St Jago in the morning we rode over the great burnt up plain till we arrived at the mouth of the valley of the Maypo. This is one of the principal rivers in Chili; the valley is bounded by the high mountains of the first Cordilleras; it is not broad, but very fertile. The numerous cottages are surrounded with Grapes, Apples, Nectarines & Peaches; the boughs of the latter were bending & breaking with the weight of the beautiful ripe fruit. In the evening we passed the Custom house, where our boxes were examined. The frontier of Chili is better guarded by the Cordilleras than by so much sea; the mountains on each side of the few narrow valleys where there are Custom-houses, are far too steep & high for any beast of burden to pass over. — The officers were very civil, partly owing to my carrying a strong passport from the President of Chili. But I must express my admiration of the politeness of every Chileno. In this instance the contrast is strong with the same class of officers in England. — I may mention an anecdote which at the time struck me: we met in Mendoza a very little, fat, poor Negress, with so enormous a goitre, that ones eyes almost involuntarily were fixed with surprise; but I noticed my two companions after looking for a short time took off their hats as an apology. Where would one of the lower classes in Europe show such feeling politeness to a poor & miserable object of a degraded race? — We slept at a cottage; our manner of travelling is delightfully independent; in the inhabited parts, we hire pasture for the animals, buy a little firewood, & bivouac in the corner of the field; carrying our cooking apparatus, we eat our supper under the cloudless sky & know no troubles.
Mapping: Revista de la Asociación Geológica Argentina
Posted by Arborfield at 07:14