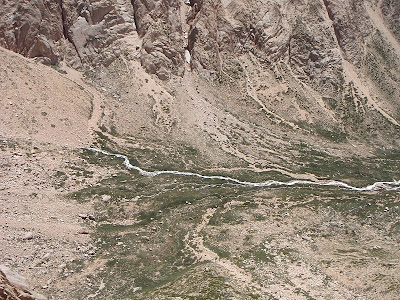 Santiago to Mendoza (Day 6) – Los Arenales
The descent is much shorter & therefore steeper than that on the other side — that is, the Cordilleras rise more abruptly from the plains than from the Alpine country of Chili. At some depth beneath our feet there was extended a level & brilliantly white sea of clouds which shut out from our view the equally level Pampas. We soon entered the band of clouds & did not again emerge from them. At one o’clock finding pasture & bushes for firewood at a spot called Los Arenales, we stopped there for the night. This is nearly the uppermost limit of bushes. I should apprehend the elevation to be about 7,000 ft. I was surprised at the general difference of the vegetation in the valleys on this side & those of the other; & still more so with the close identity in the greater part of all the living productions with Patagonia. I recognised here many of the thorny bushes & plants which are common on those sterile plains, & with them we have the same birds & peculiar insects. It has always been a subject of regret to me that we were unavoidably compelled to give up the ascent of the S. Cruz river before reaching the mountains. I always had a latent hope of meeting with some great change in the features of the country; I now feel sure it would only have been pursuing the plains of Patagonia up an ascent.
Posted by Arborfield at 08:50