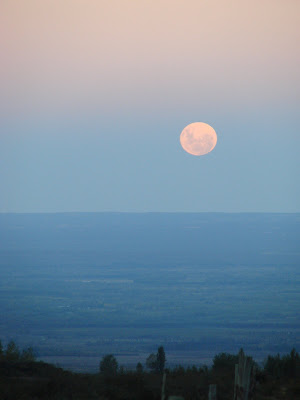 Santiago to Mendoza (Day 8) - Estacado
I was reminded of the Pampas of Buenos Ayres by seeing the disc of the rising sun intersected by an horizon level as that of the ocean. During the night a heavy dew had fallen, a thing we did not experience within the Cordilleras. The road proceeded for some distance due East across a low swamp, then meeting with the dry plain it turned up North to Mendoza. The distance is two very long days' journey. Our first day was called fourteen leagues to Estacado, & second seventeen to Luxan, near Mendoza. The whole is a level, sterile plain, with only two or three houses: we scarcely met a single person. The sun was exceedingly powerful & the ride devoid of all interest.

There is very little water in this Traversia; in the whole of the second day there was only one little pool. The small streams which flow from the mountains are dried up, or rather absorbed before they reach this distance, although we generally were only from 10–15 miles from the first range. The ground is in many parts encrusted by a saline efflorescence, hence we see the same salt-loving plants which are so common near B. Blanca. As I have already remarked respecting the Eastern valleys, there is in this Traversia also a great resemblance to the plains of Patagonia. There is one character of landscape from the Sts of Magellan to some distance North of B. Blanca; it would appear that this kind of country extends in a sweeping line to about S. Luis de la Punta, & that to the East of this is the basin of the damp & green plains of B. Ayres. The dry & sterile Traversia of Mendoza & Patagonia is a formation of pebbles, worn smooth & deposited by a former sea; whilst the Cienegas, or plains of grass, is a deposition of fine mud from a former æstuary of the Plata, which was then bounded by a coast the line of which is pointed out by the two sorts of country. The Zoology of these plains is also similar to those near the Atlantic; we have here the Ostrich, Guanaco, Agouti or Hare, Bizcatcha, same Foxes, Lions, the four species of Armadillo; the same sorts of Partridges, Carrion hawks, Butcher-birds &c &c.
Posted by Arborfield at 07:40