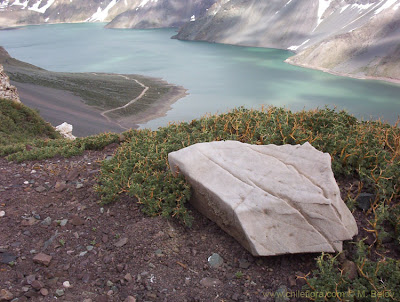 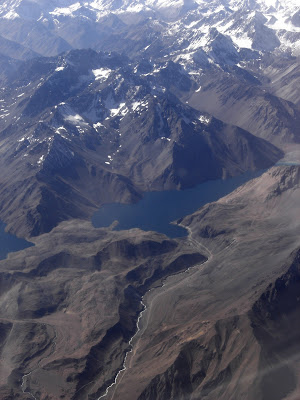 Santiago to Mendoza (Day 3) – Valle del Yeso
As we ascended the valley the vegetation became exceedingly scanty; there were however a few very pretty Alpine plants. — Scarcely a bird or insect was to be seen. — The lofty mountains, their summits marked with a few patches of snow, stood well separated one from the other; The valleys are filled up with an enormous thickness of Alluvium. In the scenery of the Andes, the parts which strike me as contrasted with the few other mountain chains which I have seen, are; — the flatness of the valleys, the narrow plain being composed of shingle, through which the river cuts a channel. Geological reasons induce me to believe that this gravel &c was deposited by the ocean when it occupied these ravines, & that the agency of the rivers is solely to remove such rubbish. If such be the case the elevation of the Andes, being posterior to most other mountains, accounts for these fringes still remaining attached to the sides of the valleys. Again, the bright colors, chiefly red & purple, of the utterly bare & steep hills; — the great & continuous wall-like dykes; — the manifest stratification, which where nearly vertical causes the wildest & most picturesque groups of peaks, where little inclined we have massive unbroken mountains; these latter occupy the outskirts of the Cordilleras, as the others do the more central & lofty parts. And lastly the vast piles of fine & generally bright colored detritus. These decline from the sides of the mountains at a high angle into the bottom of the valley. These smooth & unbroken conical piles must often have an elevation of 2,000 ft.

I have often noticed that where snow lies long on the ground, the stones seem very apt to crumble, and in the Cordilleras, Rain never falls. Hence the quantity of degraded rock. — It occassionally happens that in the Spring, a quantity of such rubbish falls over the drift snow at the base of the hills; & so forms for many years a natural Ice-house: We rode over one of these: the elevation is far beneath the line of perpetual snow. — During the day, in a very desert & exposed part of the valley, we passed the remains of some Indian houses; I shall have occasion to mention this subject again.

As the evening was drawing on, we reached the Valle del Yeso. This is a very singular basin which must once have been a large lake*. — The barrier is formed by what deserves the name of a mountain of Alluvium, on one side of which the river has cut a gorge. The plain is covered by some dry pasture, & we had the agreeable prospect of herds of cattle. The valley is called Yeso from a great bed, I should think nearly 2,000 ft thick, of white & in many parts quite pure Gypsum. — We slept with a party of men who were employed in loading mules with this substance & who had come up for the Cattle.

*It is a large lake again, the 'Embalse de Yeso' is an artificial dam with a beautiful alpine-style lake at 2560 m.
Posted by Arborfield at 05:36