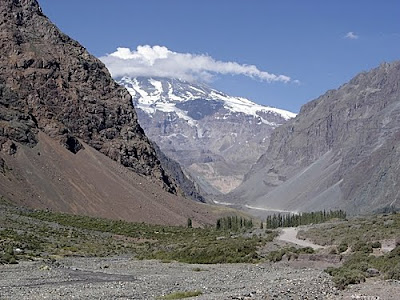 Santiago to Mendoza (Day 2) – Rio Yeso
We rode during this day to the last or highest house in the valley. The number of inhabitants became scanty, but wherever water could be brought on the land it was very fertile. The valley is very narrow & consists of a plain of shingle, generally elevated some hundred feet above the river. The Maypo is rather a great mountain torrent than a river: the fall is very great, & the water the color of mud; the roar is very like that of Sea, as it rushes amongst the great rounded fragments. — Amidst the din, the noise of the stones rattling one over the other is most distinctly audible. — The hills on each side are I suppose 3–5,000 ft high; their faces are very steep & bare, the color generally purple & stratification of the rocks is very striking; but the forms are not wild. — If the scenery is not very beautiful, it is remarkable & grand.

We met during the day several troops of Cattle which had been driven down from the higher valleys; this sign of the approaching winter hurried our steps more than was convenient for geology. Our sleeping place was about a league below where the Maypo divides into R. del Valle del Yeso & R. del Volcan; the valley leaving here its Southerly course enters more directly the main Cordilleras. — The house also is at the foot of the mountain, in the top of which are the mines of S. Pedro de Nolasko: the ascent to which is so spiritedly described by Capt. Head.— We saw the mules creeping up the zigzag track. — Even at this advanced season of the year, there were some small patches of Snow on the summit; — the height must at least be 10,000 ft. — Capt. Head wonders how mines in such extraordinary situations are discovered. In the first place, metallic veins are here generally harder than the surrounding strata, hence during the gradual degradation of the hills, they project above the surface of the ground. — Secondly almost every labourer, especially in the Northern parts of Chili, understands something about the appearances of ores. — In the great mining provinces of Coquimbo & Copiapo, firewood is very scarce & men are employed in searching for it over every hill & dale; by this means nearly all the richest mines have been discovered. — Chanuncillo, from which silver to the value of many hundred thousand pounds has been raised in the course of a few years, was thus discovered by a man picking up a stone to throw at his loaded donkey, which afterwards it struck him was very heavy, & again picking it up, he found it was nearly pure Silver. — The vein occurred at no great distance standing up like a wedge of Silver. — The miners also, on Sundays, taking a crowbar often sally out on such discoveries. — In the South part of Chili, the men who drive cattle into the Cordillera & who hunt out every ravine where there is a little pasture, are the usual agents.
Posted by Arborfield at 06:52