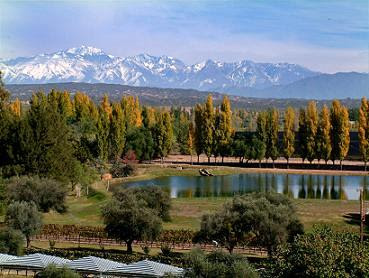 Santiago to Mendoza (Day 10)
We rode on to Mendoza; the country was beautifully cultivated & resembled Chili. From the number of houses it was almost one straggling village; the whole is celebrated for its fruit, & certainly nothing could appear more flourishing than the orchards of Figs, peaches, vines & olives. We bought water melons nearly twice as large as a man’s head, most deliciously cool & well flavoured for a halfpenny a piece; & for a Medio (3d), half a wheel-barrow full of Peaches.

The cultivated & enclosed part of the province of Mendoza is very small: being chiefly what lies between Luxan & the capital. Beyond this we have a plain such as we have seen more or less sterile; where there is Water there is pasture for cattle. The cultivated land, as in Chili, owes its fertility to artificial irrigation; & it really is wonderful, when one reflects how abundantly productive an utterly barren Traversia can be made by this simple process. The inhabitants have the reckless lounging manners of the Pampas, as also the same dress, riding-gear &c &c. They appear however a dirty drunken race, of mixed Indian & Negro blood.
Posted by Arborfield at 07:46