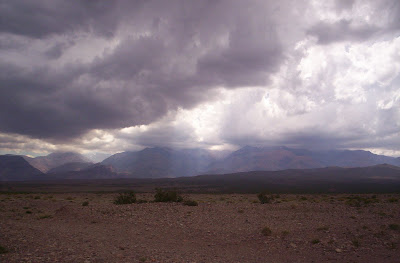 Mendoza to Santiago (Day 12) – Villa Vicencio
We had to cross this day a long & most sterile Traversia of 15 leagues. There is no water, & of course beyond the outskirts of Mendoza, not a single house. On this plain although elevated from 2 to 3,000 ft above the sea, the sun is excessively powerful; this together with the clouds of fine dust renders the travelling very irksome. We continued riding all day nearly parallel to, or rather gradually approaching to the chain of mountains; at last we entered one of the wide valleys or bays which open on the plains; this soon narrowed into a ravine, a little way up which is the house of Villa Vicencio. As we had ridden all day without any water, we were very thirsty, & looked out anxiously for the stream which flows down the valley. It was curious how gradually the water made its appearance; on the edge of the grand plain of shingle the course was quite dry, by degrees it became damper, till there were puddles of water; these soon were connected, & at Villa Vicencio there was a small running brook.
Posted by Arborfield at 08:01