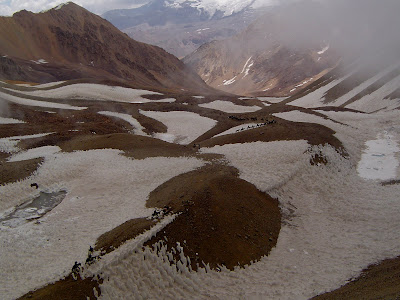 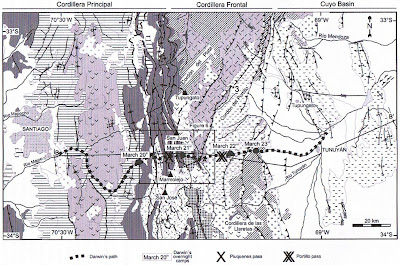 [Looking down the Portillo Pass -- a train of mules distinctly visible -- plus a map of Darwin's route for these days. Click on either, or indeed any image in the weblog, for the full effect]

Santiago to Mendoza (Day 5) – Portillo Pass
After eating our potato-less breakfast, we travelled across the intermediate tract to the foot of the Portillo range. In the very middle of summer cattle are brought up here to graze, but they had now all been removed, even the greater number of the guanaco had decamped, they knowing well that if overtaken by a snow storm they would be caught in a trap.

We had a fine view of a mass of Mountains called Tupungato, the whole clothed with unbroken snow; from one peak my Arriero said he had once seen smoke proceeding; I thought I could distinguish the form of a large crater. In the maps Tupungato flourishes as a single mountain; this Chileno method of giving one name to a tract of mountains is a fruitful source of error. In this region of snow there was a blue patch; no doubt a glacier. A phenomenon which is not thought to occur in these mountains. Again we had a heavy & long climb similar to that up the Puquenes range. On each hand were bold conical hills of red Granite. We had to pass over still broader pieces of perpetual snow; this by the action of the thaw had assumed the form of numberless pinnacles, which as they were close together & high rendered it difficult for the Cargo Mules to pass.

(Note in margin: Mem. Icebergs Arctic Regions.) A frozen horse was exposed, sticking to one of these points as to a pedestal, with its hind legs straight up in the air; the animal must have fallen into a hole head downmost & thus have died.
When nearly on the ridge we were enveloped in a cloud which was continually falling in the shape of minute frozen spiculæ. This was very unfortunate as it continued the whole day & quite intercepted the view. This pass of the Andes takes the name of the Portillo from a narrow cleft in the crest of this range, through which the road passes. From this point on a clear day the great plains are to be seen.

We descended to the first vegetation, & found good quarters under the shelter of some large fragments of rock. We have found some passengers, who made anxious enquiries about the state of the Roads. Shortly after it was dark, the clouds suddenly cleared away; the effect was quite magical, the great mountains, bright with the full-moon, seemed impending over us from all sides, as if we had been at the bottom of some deep crevice. I saw the same striking effect one morning very early. Now that the clouds were dispersed it froze severely: but as there was no wind we were very comfortable. The increased brilliancy of the moon & stars at this elevation is very striking & is clearly owing to the great transparency of the Air. All travellers have remarked on the difficulty of judging of heights & distances in mountainous districts & generally attribute it to the want of objects of comparison. It appears to me that it is full as much owing to the extreme transparency, confounding different distances; & partly likewise to the novel degree of fatigue from a little exertion opposing habit to the evidence of the senses. I am sure this transparency gives a peculiar aspect to the landscape; to a certain extent all the objects are brought in one plane as in a drawing. The cause of this state of the atmosphere is, I presume, owing to the equal dryness. The skin & some of the flesh of the Carcases of dead animals are preserved — articles of food, such as bread & sugar, become very hard — woodwork shrinks, as I found with my Geological hammer. All of which shows the extreme dryness. Another curious effect is the facility with which Electricity is excited. My flannel waistcoat appeared in the dark when rubbed as if washed with Phosphorus — every hair on a dogs back crackled, the sheets & leather gear of the saddle in handling all sent out sparks.
Posted by Arborfield at 07:51