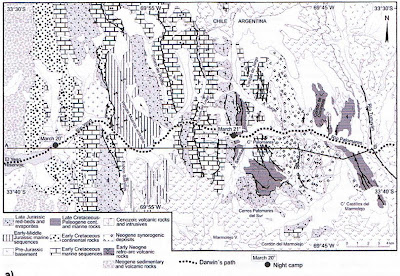 Mapping: Revista de la Asociación Geológica Argentina
Santiago to Mendoza (Day 4) – Piuquenes Pass
We began our march early in the day; we followed the course of the river, which by this time was small, till we arrived at the foot of the ridge which separates the waters which flow into the Pacifick & Atlantic Oceans. Until now our road had been good & the ascent steady but very gradual; now commenced the steep zigzag track. The Cordilleras in this pass consist of two principal ridges, each of which must be about 12,000 ft high; the first called Puquenes forms the division of the waters & hence of the Republics of Chili & Mendoza; to the East of this we meet an undulating track with a gentle fall & then the second line of the Portillo; through this, some way to the South the intermediate waters have a passage.
We began the tedious ascent, & first experienced some little difficulty in the respiration. The mules would halt every fifty yards & then the poor willing animals would after a few seconds of their own accord start again. The short breathing from the rarified air is called by the Chilenos, Puna. They have most ridiculous ideas respecting its nature; some say "all the waters here have Puna" others that "where there is snow there is Puna" & which no doubt is true. It is considered a sort of disease, & I was shown the crosses of several graves where people had died "Punado". I cannot believe this, without perhaps a person suffering from organic disease of the Chest or Heart: or very likely any one dying from whatever cause would have unusual difficulty in breathing. The only sensation I experienced was a slight tightness over the head & chest; a feeling which may be known by leaving a warm room & running violently on a frosty day. There was a good deal of fancy even in this, for upon finding fossil shells on the highest ridge, in my delight I entirely forgot the Puna. Certainly the labor of walking is excessive, & in breathing deep & difficult; & it is nearly incomprehensible to me how Humboldt (& others subsequently) have reached 19,000 ft. No doubt a residence of some months in Quito, 10,000 ft high would prepare the constitution for such an exertion. Yet in Potosi, strangers, I am told, suffer for about a year.
When about halfway up, we met a large party of seventy loaded mules & passengers; it was a pretty sight to see the long string descending, & hear the wild cries of the Muleteers; they looked so diminutive; no bushes, nothing but the bleak mountains with which to compare them. Near the summit the wind, as is almost always the case, was violent & very cold; on each side of the ridge we had to pass over broad bands of Snow, which is perpetually there & now would soon be covered by a fresh layer. I there first observed the substance described by the Arctic navigators as Red Snow. Subsequently I found under the microscope it consists of groups of minute red balls, the diameter of which is 1/1000th of an inch, & having several envelopes. The snow was only tinged where crushed by the mules hoofs & where the thaw had been rapid.
When we reached the crest & looked backwards, a glorious view was presented. The atmosphere so resplendently clear, the sky an intense blue, the profound valleys, the wild broken forms, the heaps of ruins piled up during the lapse of ages, the bright colored rocks, contrasted with the quiet mountains of snow, together produced a scene I never could have imagined. Neither plant or bird, excepting a few condors wheeling around the higher pinnacles, distracted the attention from the inanimate mass. I felt glad I was by myself, it was like watching a thunderstorm, or hearing in the full Orchestra a Chorus of the Messiah.
We descended into the intermediate district & took up our quarters for the night: the elevation cannot be much short of 10,000 ft, in consequence the vegetation is very scanty & there are no bushes; the roots of a certain plant which are thick, serve for bad fuel. It was piercingly cold, & I having a headache went to bed. During the night the sky suddenly became clouded; I awakened the Arriero to know if there was any danger, but he told me, without thunder & lightning there is no risk of a bad snow storm. The peril is imminent, & the difficulty of subsequent escape great, to a person caught in a heavy storm between the two Cordilleras. There is only one place of shelter, a cave, where Mr Caldcleugh, who crossed on the very same day of the month, took refuge for some time. From this cause the Portillo pass in the Autumn is so much more dangerous than the other one, where there are Casuchas built.
Under the diminished pressure, of course water boils at a lower temperature; in consequence of this the potatoes after boiling for some hours were as hard as ever; the pot was left on the fire all night, but yet the potatoes were not softened. I found out this, by overhearing in the morning my companions discussing the cause; they came to the simple conclusion that "the cursed pot (which was a new one) did not choose to boil potatoes".
Posted by Arborfield at 07:51