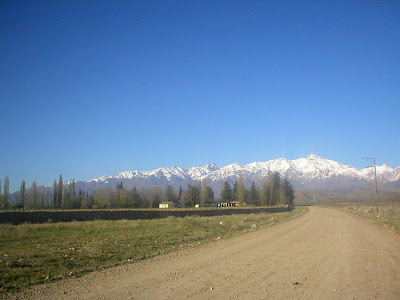 Santiago to Mendoza (Day 9) - Luxan
After our tedious days ride, it was refreshing to see in the distance the rows of Poplars & willow trees & green gardens around the village of Luxan. Shortly before arriving at this place, we saw to the South a large ragged cloud of a dark reddish brown color. For some time we were convinced that it was heavy smoke from a large fire in the Pampas; it afterward turned out to be a Pest of Locusts. They were travelling due North with a light breeze & overtook us, I should think, at the rate of 10 — 15 miles an hour. The main body reached from 20 to perhaps 2,000 to 3,000 ft above the ground. The noise of their approach was that of a strong breeze passing through the rigging of a Ship. The sky seen through the advanced guard appeared like a Mezzotinto engraving, but the main body was impervious to sight; they were not however so thick but what they could escape from the waving backwards & forwards of a stick. When they alighted they were more numerous than the leaves in a field and changed the green into a reddish colour: the swarm having once alighted the individuals flew from side to side in any direction. This is not an uncommon pest in this country; already during the season several smaller swarms had come up from the sterile plains of the South & many trees had been entirely stripped of their leaves. Of course this swarm cannot even be compared [to] those of the Eastern world, yet it was sufficient to make the well known descriptions of their ravages more intelligible. I have omitted perhaps the most striking part of [the] scene, namely the vain attempts of the poor cottagers to turn the stream aside; many lighted fires, & with the smoke, shouts, & waving of branches, endeavoured to avert the attack.

We crossed the river of Luxan; this is a considerable body of water, its course however toward the sea coasts is but very imperfectly known: They either are dried up in the plains or form the R. Sauce & R. Colorado. We slept in the village, it is a small place, 5 leagues South of Mendoza, & is the S. limit of the fertile territory of that Province. At night I experienced an attack, & it deserves no less a name, of the Benchuca, the great black bug of the Pampas. It is most disgusting to feel soft wingless insects, about an inch long, crawling over one’s body; before sucking they are quite thin, but afterwards round & bloated with blood, & in this state they are easily squashed. They are also found in the Northern part of Chili & in Peru: one which I caught at Iquiqui was very empty; being placed on the table & though surrounded by people, if a finger was presented, its sucker was withdrawn, & the bold insect began to draw blood. It was curious to watch the change in the size of the insects body in less than ten minutes. There was no pain felt. This one meal kept the insect fat for four months. In a fortnight, however, it was ready, if allowed, to suck more blood.
Posted by Arborfield at 07:36

The "Benchuca" mention here by Darwin is the commonly know as a "Vinchuca" in South America. This type of assassin bug is the overwhelming infection vector of Chaga's disease which currently infects millions in Latin America. There is no known cure for Chaga's (caused by a parasite - Trypanosoma cruzi) and eventually, after many years, it results in fatal organ damage.