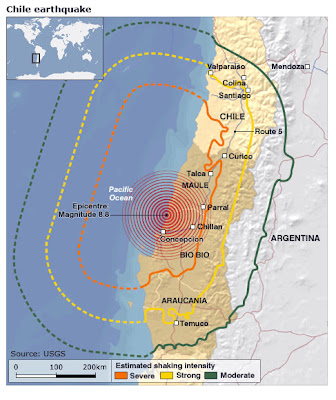 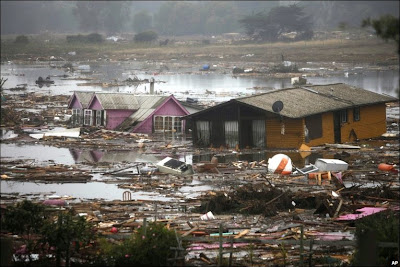 [Both images above are, of course, from the devastating earthquake of 27th February, 2010]

Concepcion
As soon as the ship entered the harbor of Concepcion, I landed on the island of Quiriquina, & there spent the day, whilst the ship was beating up to the anchorage. The Major domo of the estate rode down to tell us the terrible news of the great Earthquake of the 20th: — "That not a house in Concepcion or Talcuhano (the port) was standing, that seventy villages were destroyed, & that a great wave had almost washed away the ruins of Talcuhano". — Of this latter fact I soon saw abundant proof; the whole coast was strewed over with timber & furniture as if a thousand great ships had been wrecked. Besides chairs, tables, bookshelves &c &c in great numbers, there were several roofs of cottages almost entire, Store houses had been burst open, & in all parts great bags of cotton, Yerba, & other valuable merchandise were scattered about. During my walk round the island I observed that numerous fragments of rock, which form the marine productions adhering to them must recently have been lying in deep water, had been cast high up on the beach: one of these was a slab six feet by three square & about two thick.

The Island itself showed the effects of the Earthquake, as plainly as the beach did that of the consequent great wave. Many great cracks which had a North & South direction, traversed the ground; some of these near the cliffs on the coast were a yard wide; & many enormous masses in every part had fallen down; in the winter when the rain comes, the water will cause greater slips. The effect on the underlying hard slate was still more curious; the surface being shattered into small fragments. — If this effect is not confined, as I suppose it is, to the upper parts, it appears wonderful that any solid rock can remain in Chili. — For the future when I see a geological section traversed by any number of fissures, I shall well understand the reason. I believe this earthquake has done more in degrading or lessening the size of the island, than 100 years of ordinary wear & tear.

Captain Fitzroy’s Journal:
When the Beagle entered Concepcion Bay, she had only one heavy anchor left, having broken or lost the others; and as there were none fit for her at Talcahuano, it became absolutely necessary to go to Valparaiso.

Syms Covington Journal:
Went to the Island of Quiriquina previous to ship coming to an anchor. This island is in the mouth of the harbour. In our going on shore we found the Island dreadfully cracked the Island was also surrounded with the timbers and furniture of houses which had floated from Talcahuano. Left the island for the ship after dark. It WAS about four miles, and in consequence of its blowing heavy, and both wind and tide against us, we were four or five hours before reaching ship, both cold and wet, the waves constantly breaking over the boat, and of course, drenched to the skin. A treat, but nothing new.
Posted by Arborfield at 06:57