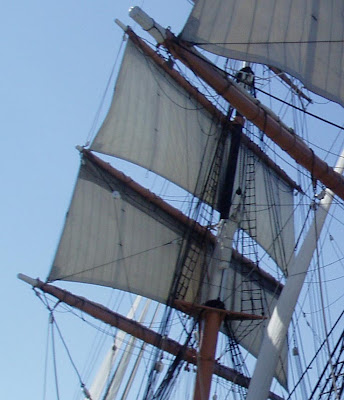 Concepcion to Valparaiso
After the last three active days we made sail for Valparaiso. — Mr Stokes & Usborne are left on shore with tents to work at the Charts. It is a great convenience to many of the inhabitants our proceeding & returning directly from Valparaiso. — there is a great derth of money, & we shall be able to bring a supply. — The Captain took on board a Padre, whom we found houseless. — We had known him at Chiloe. — The wind being Northerly, we only reached the mouth of the harbor after it was dark; a heavy fog coming on & being very near the land we dropped the anchor. Presently a large American Whaler appeared close a long side of us: we heard the Yankee swearing at his men to keep quiet whilst he listened where the breakers were: The Captain hailed him in a loud clear voice to anchor where he then was. The poor man must have thought the voice came from the shore, such a Babel of cries at once issued from the ship; every one hollowing out, "Let go the anchor, veer cable, shorten sail"; it was the most laughable thing I ever heard; if the ship had been full of Captains & no men to work, there could not have been such an uproar of orders. We afterward found the Mate stuttered: I suppose all hands were assisting him in giving his orders.
Captain Fitzroy’s Journal:
We left the melancholy ruins and their disconsolate tenants.
Posted by Arborfield at 07:50