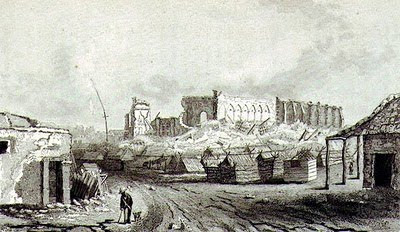 [The cathedral in Concepcion after the 1835 earthquake]

Concepcion
I crossed the Bay to Linguen to see the best coal-mine of Concepción: as all the rest which I have seen, it is rather Lignite than Coal & occurs in a very modern formation. — The mine is not worked, for the coal when placed in a heap has the singular property of spontaneously igniting, it is certain that several vessels have been set on fire. — I found Capt. Walford, a Shropshire man, residing in a nice quiet valley. — Linguen is a short distance from Penco; the former port of Concepcion, which was destroyed by an Earthquake & consequent wave in the year 1751. — From what I could see at the distance, the overthrow could not have been so complete as now at Talcuana. How strange it is with this example before their eyes, people should build houses & massive churches with bricks.

I am much disappointed with the scenery of Concepcion; the outline of the land is very tame & no part of the Cordilleras or intermediate high mountains are in view: In the general aspect of the vegetation there is a greater similarity to Valparaiso than the damp forests of the South; yet here in the valleys there is plenty of wood. — I could see none of the Park-like scenery mentioned by Capt. Basil Hall on the road to Concepcion: it might perhaps wear that aspect to a person who had just returned from the sterile sands of Peru.

In the course of the day I felt two smart Earthquakes & there was a third which I did not notice; the first was sufficient to make a heap of tiles rattle. — Yet I believe this day has been freer from shocks than almost any one since the great & first Earthquake. They expect to feel small tremblings for some weeks to come. — These shocks render the searching for property amongst the ruins very dangerous; for there must always be a great probability of the shattered walls falling in.
Posted by Arborfield at 06:54

When The popular comment layout is common, so it is easily recognized scanning to post a comment. If the comment section is in a different format, then I am going to spend more time trying to decipher what everything means.

Not sure what you mean? I haveno control of the 'comment layout', that's down to Blogspot.